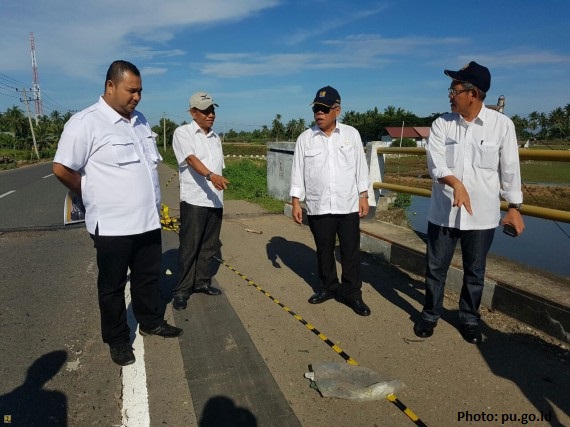 ACEH - Earthquake Disaster in Aceh measuring 6.4 Richter scales on Wednesday, December 7 has received special attention from the Indonesian Government, especially the Ministry of Public Works and Public Housing (Kemenpupr). Minister PUPR Basuki Hadimuljono has even led the emergency response team to review the conditions in the field.

As reported from pu.go.id today (9/12/2016), Minister Basuki declared a state of emergency, the most important is the availability of infrastructure and facilities for clean water and sanitation for daily necessities for the victims and refugees. So far the earthquake has casualties numbered 82 people and it may still be growing.

"We are very concerned about clean water, especially in places of refuges. We will take advantage of the drinking water treatment plant (IPA) nearest to supply clean water, especially in the post-evacuation, "explained Minister Basuki. He added that now from the nearest available 3 IPA, only 1 IPA continues to function well because it relies on a gravity system, but two other IPA may not work because of power failures.

To ensure the supply lines running smoothly, including food and medicine, the Ministry of Public Works and Public Housing through the Disaster Management Task Force had sent heavy equipment to assist emergency response in Aceh earthquake. Heavy machinery being used to help the evacuation of disaster victims. Since yesterday is already deployed in Pidie Jaya in the form of two excavators and 1 W Loader derived from National Road Implementing Hall I Aceh.

Moreover, the equipment that was already in the refugee camps in the form of four units of water tankers tanks capacity of 6000 liters each. Meanwhile, to anticipate a shortage of facilities, is currently in the course of Depo Regional Medan is 5 Water Tank Car unit capacity of 4000 liters, 70 units Public hydrants 2000 liters, 30 units of Public hydrants 1000 liters and MCK knockdown of 80 units.