KEMENPUPR Ensure The Readiness of Toll Infrastructure in Welcoming Eid 2017 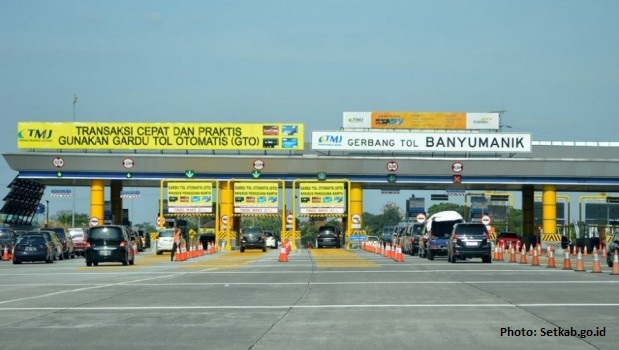 SEMARANG - People who will be travelling by car to celebrate the Eid holidays next June will be easier because infrastructure development is getting better. This was confirmed directly by Basuki Hadimuljono, Minister of Public Works and Public Housing (PUPR).

"PUPR Ministry and State Owned Enterprises of Toll Road which are PT. Jasa Marga, PT. Waskita and PT. Sumber Mitra Jaya agreed to keep the rhythm of work and can be completed on time for the functional, Which is expected to reduce congestion on Idul Fitri this year, "said Basuki as reported from Setkab.go.id (01/09/2017).

As is known Pejagan-Pemalang toll road has a length of 57,5 km and consists of 4 sections. For section 1 and 2 to East Brebes Exit was operated on in June 2016 ago. The progress of the construction of toll roads Pejagan-Pemalang section 3 and 4 has reached 57,25 percent and 98 percent of the land acquisition.

As for Pemalang-Batang toll road has a length of 39 km, although it has a target to operate in December 2018, the Minister Basuki also targets can be functional at this holiday time (Eid,-ed).

"Pemalang-Batang toll road has a total length of 39 km and there are a couple of kilometers that the quality of the soil is hard, the term soft soil, so that need necessary treatment and had already agreed to do with the method of vacuum," said Basuki.