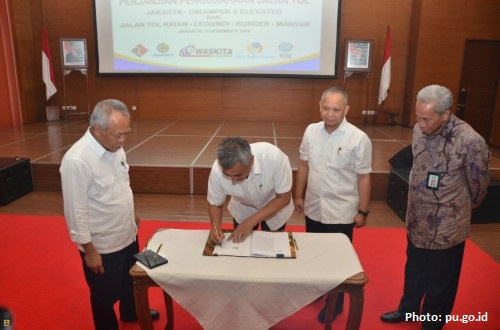 Not only that, the signing was also conducted by Herry Trisaputra Zuna for highway projects Krian-Legundi-Bunder-Manyar (KLBM) along the 38 km worth Rp 12 trillion, together with Director of PT Waskita Earth Wira Herwidiakto a consortium consisting of PT Waskita Toll Road (55 percent), PT Bumi Energy Mining (25 percent) and PT Panca Usaha Wira (20 percent).

The signing was witnessed by the Minister PUPR Basuki Hadimuljono who in his speech said, "I think the benefits of each highway is expected to be one of the solutions to solve traffic congestion in the surrounding area, especially the smooth distribution to reduce logistics costs economically," said him as reported from pu.go.id, today (06/12/2016).

Minister Basuki hoped that after the signing of the toll road concession (PPJT), the project could begin. "It must be worked immediately and not have to wait for groundbreaking," he said. Given the current condition of the highway already crowded, the road widening must be done first. "Hopefully there will be more than three months," said Minister Basuki.

According to him, one of the most special on this day that is the second development of this highway needs to focus on the work methods. "So it's not a new field but of existence, there is Light Rail Transit (LRT) and also a Fast Train Jakarta-Bandung (High-Speed Train) so it needs a full coordination in this project," concluded Minister Basuki.